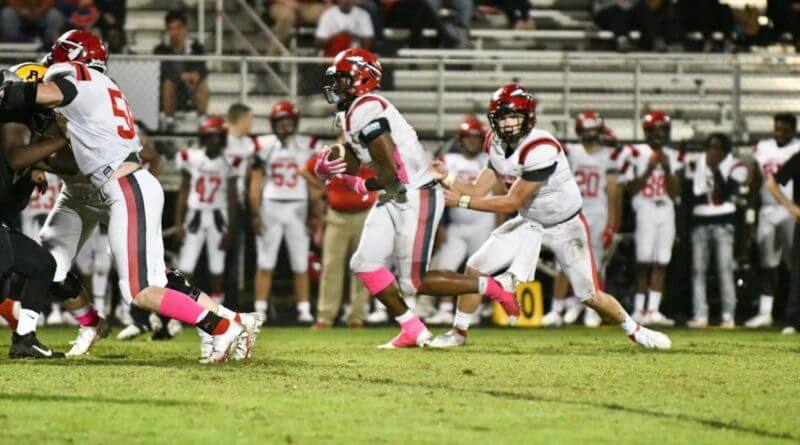 Corinth knew a win on the road Friday night would make them back to back district champions and lock up a first round bye in the 4A playoffs, a pair of goals that are at a premium on their quest to repat as 4A champions.

A total team effort in all three phases of the game would lead the Warriors to check off the district title and the bye with a 35-20 win over a scrappy Ripley team.

“We achieved part of our goals for this season with this win tonight. We are a #1 team with the district title and I expect us to play like it from this point forward in the season. Our first goal of the season was a district title, and that is accomplished,” Corinth head coach Todd Lowery said after the win.

Ripley jumped out early with a 95 yard kick return toucdown to take a 6-0 on the games opening play.

The Warriors had an immediate answer two plays later with a Cayden Betts 46 yard touchdown run to give the Warriors a 7-6 lead that they would never give up, despite the score staying close for much of the contest.

Betts got his second score of the night early in the second quarter, but the Warriors were not able to muster any more first half points and took a 14-6 lead in to halftime. Despite the single score differential, Corinth held the Tigers to under 50 first half yards.

“I think we came out a little flat. We had to change our plan a little because Ripley executed their gameplan very well. Hats off to them,” Lowery said about his teams first half performance.

Luckily for Corinth, the special teams joined the defense in being on point and produced the first points of the second half on a Q Wismatt 56 yard kickoff return to give Corinth a 21-6 advantage.

The Tigers again answered back, driving down the field behind a strong run game led by Immanuel Griffin to get inside the 5 yard line. Two plays later, Shaundell Carter plunged in to the end zone to cut the lead to 21-12.

After a failed 4th down conversion from Corinth, Ripley again found the endzone on a Ty Long to Sentavius Hunt 25 yard touchdown reception to cut the lead to just one at 21-20 after a Joseph Smith two point conversion.

Betts would close out the scoring on a 27 yard touchdown run in the fourth quarter, his fourth of the night, which put him over 300 all purpose yards on the night.

Corinth moves to 6-2 on the season. They finish the regular season next week against North Pontotoc as they await their first round playoff opponent.