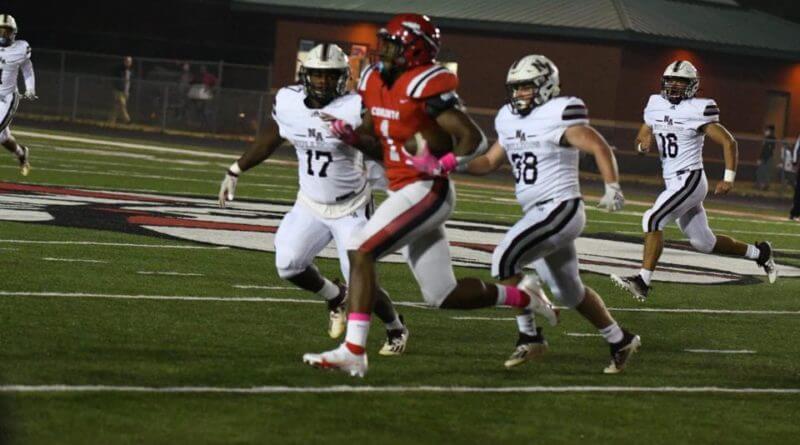 Corinth knew that New Albany would come in to town looking to knock off the Warriors and lay claim to first place in district 1-4A. The Warriors needed to keep pace with the Bulldogs high powered offense, which came in to the contest averaging nearly 40 points per contest.

A career day from Cayden Betts and a big fourth quarter would ensure the Warriors would walk away with their 6th straight district win and remain in 1st place in their district.

Betts would tie the Corinth record with five touchdowns while setting both the career and season record with his 3rd return touchdown of the year and 4th of his career as the Warriors moved to 4-2 (2-0) with a 58-35 win on Friday night.

“Cayden is just a special player. He answers back whenever we need a score and has been making plays for us all year,” Corinth coach Todd Lowery said of his senior standout.

The Warriors fell behind 7-0 to New Albany early after a series of miscues led to a 40 yard loss and a 1-yard plunge from Bulldog standout running back CJ Hill.

Betts would set the return record on the ensuing kickoff, taking it 88 yards for a score to tie the game. Corinth would not trail from that point forward, forcing a punt on the next New Albany possession that Betts nearly took for a score.

The Warriors gave themselves a cushion with a trio of big plays to start the second quarter, starting with a Christian Barber touchdown followed by sophmore safety Chris Rodgers getting his second turnover of the first half and taking it 54 yards to the Corinth 3 yard line.

Cayden Betts went back to work and punched it in 2 plays later for a 21-7 lead.

The Bulldogs would answer back with another Hill touchdown on the ground, but Betts picked up his 3rd first half touchdown as time expired and Corinth took a 28-14 halftime advantage to the locker room.

In the second half, every time Corinth would score the Bulldogs would answer and the game was a one possession affair with 7 minutes to play in the ball game after Joe Mathis hit Cameron Knox for a 65 yard touchdown to make it a 42-35 game.

The Warriors, as they so often do, would rise to the challenge.

Brawner Cregeen hit Barber for a long touchdown on third down followed by a safety from Parker Little on a bobbled punt attempt from New Albany and the fifth touchdown of the night from Betts to ice the game with 1:49 seconds to play.

Corinth clinched a playoff berth with the win. They are on the road in another key 1-4A matchup next week against Ripley with the chance to clinch a home playoff game. More pictures on the Alcorn County Sports page.