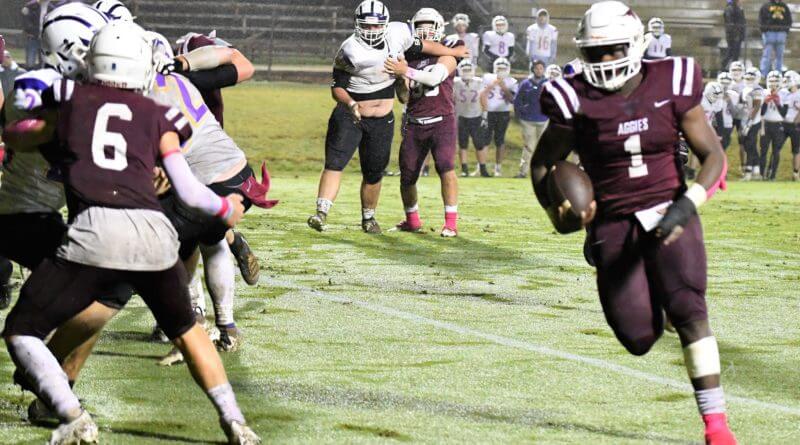 The Aggies and Golden Bears played a high stakes contest on Thursday on a muddy field on Alcorn County. The the winner clinching a playoff spot and the losers season ending in the cold rain.

Kossuth used a potent ground attack that played well given the field conditions to claim a 32-12 win on Senior night in Kossuth.

The Aggiest and the Golden Bears each had a turnover on their opening possession due in part to the field conditions. Clayton Jacobs recovered a fumble for Kossuth and the Aggies were driving as the first quarter ended with no score. Zamarius Alexander would find the endzone from three yards out to score for Kossuth 3 plays into the 2nd quarter for a 6-0 lead.

After a fourth down stop for Kossuth on the next Central drive, Alexander would again find pay dirt, this time on a highlight reel 61 yard run where he broke 5 tackles and reversed field on a pitch option from Brock Seago. Kossuth would take a 12-0 led into halftime.

Central would attempt an onside kick to start the 2nd half that the Aggies controlled, but after a 3 and out the Bears would block the Kossuth punt attempt. Seth Jones would take the ensuing play 46 yards on a dive play to cut the lead to 12-6 after a failed two point conversion.

Field conditions would again play a factor, as Central was not able to get a punt away on the next posession and Alexander would get his third rushing touchdown of the night to make the score 19-6 after the extra point.

Jacob Leatherwood would add a score for the Bears to cut the lead to 19-12 but Seago would add a quarterback sneak touchdown and Brady Kelly would get a 34 yard touchdown run to close out the scoring.

Kossuth locks up the playoff spot and moves to 3-6 on the season. Central closes out the season 2-7. The Aggies move on to play Winona in the first round of the playoffs.