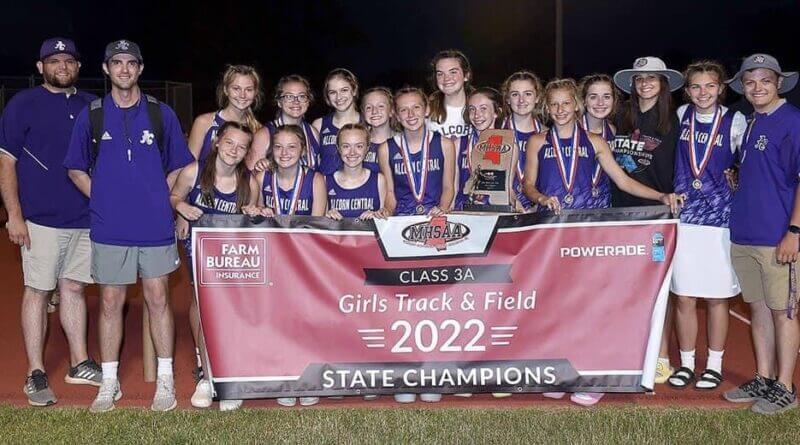 Pearl High School is a familiar place for Alcorn Central track athletes. It is the pinnacle of Mississippi track competition. However, this year was more special for the Lady Bears as they did something that only a few teams in the state have ever accomplished – won a state championship by completing the track & field grand slam!

This season started like all other track seasons in recent years. Runners and field athletes got to work after Christmas break putting together the pieces of the puzzle. The coaching staff, consisting of Head Coach Samuel Holley and Associate Head Coach John Mask, started taking notes and putting athletes through specific workouts and trials to test endurance, speed, and overall talent and ability. According to the coaches, this is really where the season started.

The team was expected to do well this season with several returning members and a few fresh faces. The ACHS Lady Bear distance department was strong after coming off a top four finish in the MHSAA 3A Cross Country Championship including two All-State finalists in November. This set the stage for a competitive track season in distance events. Last year, the Lady Bears were able to pick up some young talent that helped bring some speed and agility to the team. ACHS was able to put together competitive speed relays and began growing field event competitiveness in multiple areas. The team grew in athletes and in coaches. “Daniel Derrick joined the squad as an assistant coach this year and filled in gaps that we didn’t even know we had open,” said Coach Holley, “He has been a major asset.”

The possibility of winning a state championship became more evident after the conclusion of the 1-3A Division Meet. “At the beginning of the season, a state championship in track was not something we had thought about very seriously. When we got to the Region meet at Tish County and North Half Meet at Winona, we started to realize how possible a championship was,” said Coach Mask. “Coaches from other schools came to us telling us how they were pulling for us. When we asked why they were pulling for us, they all said pulling for a championship. That encouragement gave us a real fire, try and make it happen,” said Coach Holley. Both coaches said they try to have athletes only focus on the task at hand and do their best no matter the level of competition.

After completing the triple crown – division, region, and north half championships – the Lady Bears put their focus on Pearl. ACHS qualified 15 total athletes to compete in 10 different events with some athletes competing in several events. In the crosshairs of the Lady Bears were two private schools from the south – Saint Andrews High School and Saint Patrick High School. These schools often have good distance runners and tend to compete well on this stage.

Every event had a major impact on the overall performance of the team. The team was able to claim four gold medal events in total. The 4x800m relay team of Noel Selph, Ella Tucker, Anslee Kemp and Aubree Justice won the gold with a new Class 3A state record time of 10:19. That performance got the day started in the right direction by claiming ten points for the Lady Bears. Aubree Justice won the 1600m run with a time of 5:43 and the 800m run with a time of 2:31. The final event of the day sealed the deal for the Lady Bears with a 4:19 gold medal performance in the 4x400m relay consisting of Neely Rorie, Olivia Walker, Addison Lutz, and Ellie Pellizzer. Most spectators agreed that this may have been their favorite race of the day because of its competitiveness; the Lady Bears entered the race ranked fifth and left with the gold!

Every state competitor scored the Lady Bears some very valuable points. AC tallied twenty-three points in field events this year. Mattie Mynatt finished with a silver medal in the discus throw with a longest toss of 97’ 10” and a bronze medal with a 33’ 01” throw in shot put collecting a total of 14 points. Ellie Pellizzer added 5 points to the Lady Bears’ total with a 34’ 01” fourth place finish in the Triple Jump. Allie Grace Kirkland put four points on the board with seventh place finishes in shot put and discus with 27’ 05” and 76’ 11” throws respectively.

This is a big accomplishment for the talented, young squad. Holley said, “This win means a lot to our school and program. It puts us on the map among some of the best track teams in the state. It just shows how much our team strives to be successful.” Congratulations to the ACHS Lady Bear Track & Field for their State Championship!