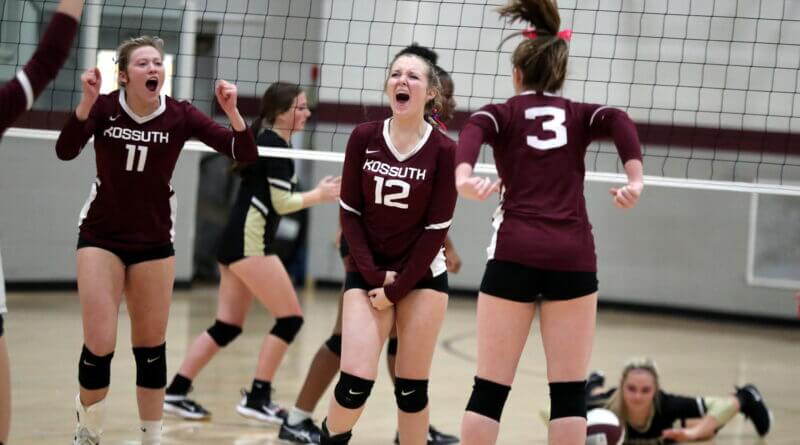 Another game day. Another victory for the Lady Aggies.

This one meant a little more, as the 14th straight win for Kossuth has put them in the North Half championship game.

Amory came to town and the Lady Aggies got their 5th straight sweep with a 25-22, 25-18, 25-10 victory to set up a rematch with in county foe Alcorn Central with a chance to play for a state title on the line.

Kossuth won a back and forth opening set over a scrappy Amory team and seized control from there, controlling the game in all phases to come away with the sweep.

Kossuth head coach Dawnell Haupt spoke of how hard her team has worked to get to this point of the season.

“This team has worked very hard and earned every game and set they’ve won.The Lady Aggies are playing hard and firing on all cylinders,’ Haupt said of her team’s win streak and position as one of the final four 3A squads still playing this year.

Aven Mathis led the Lady Aggies with 12 kills. Bailey Wilbanks turned in an all around performance, putting up 5 kills, aces and blocks to go with 4 digs. Emma Arthur had 15 assits while Macadyn Holley added 11. Ashlyn Isbell was strong at the net with 5 kills and a pair of blocks.

The Lady Aggies are back home on Tuesday against rival Alcorn Central. The Lady Bears swept past Water Valley on Thursday to set up what is sure to be a super competitive match. Haupt feels her team is ready.

“Playing Central on our home turf will be an epic matchup. We are looking forward to it.”