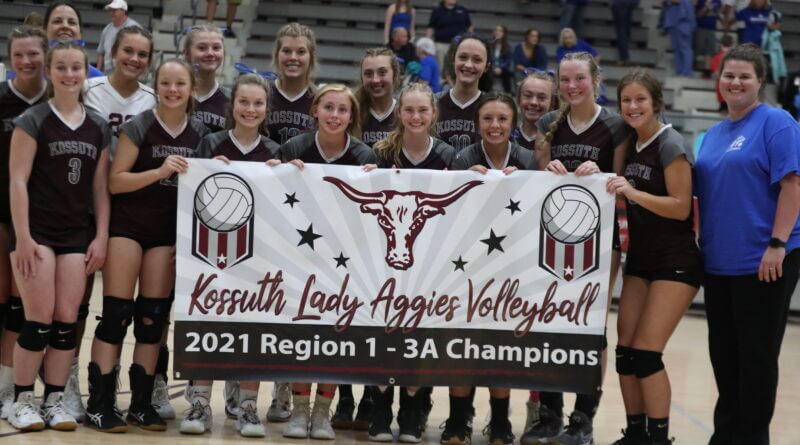 CHECK OUT THE PHOTO ALBUM FOR KOSSUTH VOLLEYBALL HERE

Kossuth needed clarification from the MHSAA to determine their place in the Region title race between them and in-county foe Alcorn Central.

What was perfectly clear was they needed a win on Tuesday night against Region opponent Mantachie or it was a moot point.

The Lady Aggies, as has become the norm as of late, delivered.

Kossuth swept past the visiting Lady Mustangs on Senior Night and in doing so wrapped up the Region 1-3A championship.

“We had been on the phone with the state (MHSAA) several times to see where we stood. Finally, our AD [Brain Kelly] spoke with Director Neeves to get confirmation that Alcorn Central’s forfeit to us counted as a 3-0 win. We won a set against them eariler in the year, so we won the head to head 4-3,” Kossuth Head Coach Dawnell Haupt explained.

On Thursday, all thoughts turned to Mantachie to ensure their was no doubt on the court.

Kossuth won 3-0, flexing their muscle at the net to the tune to 36 kills to come away with the sweep.

Aven Mathis led with ten kills and a trio of aces. Ashlyn Isbell and Bailey Wilbanks each had 9 kills. Wilbanks led with 8 digs and a pair of blocks. Emma Arthur led with 11 assits. Dacy Marsh contributed with 10 assists.

On top of the Region title and Senior night, Kossuth also honored head baseball coach Daniel Threadgill, who passed away on Tuesday after a 2 year battle with colon cancer.

Kossuth is back in action to wrap up the regular season against Amory on Thursday.