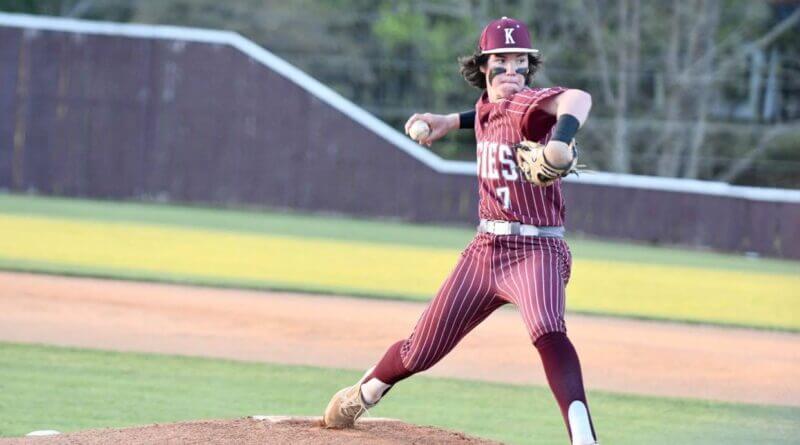 The Kossuth standout, ranked as the #1 player in the state for his graduating class by PBR, has proven it against every team he has faced as a starting pitcher for the Aggies this season.

Eaton sits atop the leaderboard in strikeouts for all 3A pitchers according to national sports stat aggregator MaxPreps with 89 K’s on the year. That is good enough for the #2 spot overall in the MHSAA and the #9 slot when you include private schools in the MAIS.

The freshman has 11 appearances on the season, tossing 50 innings and compiling a 2.10 ERA to go along with his strikeouts. Opposing batters are hitting just .152 against the righty on the season.

“When he gets the ball in his hand on the mound, he wants to win the matchup everytime,” Kossuth coach Daniel Threadgill said. “He’s a freshman but he has really done well for us on the mound this season.”

Eaton has been clocked in the high 80’s with his fastball and has a breaking ball he can use a strikeout pitch. He has thrown primarily against district opponents this season in must win games against one of the toughest regions in Mississippi baseball and has compiled a 5-1 record on the mound.

The Aggies have wrapped up the regular season and now turn their attention to the 3A playoffs where they can be dangerous in a 3 game series with Eaton and senior Jaxin Settlemires anchoring the pitching staff.

Look for more pictures, video and coverage of Kossuth on the Alcorn County Sports Facebook page.