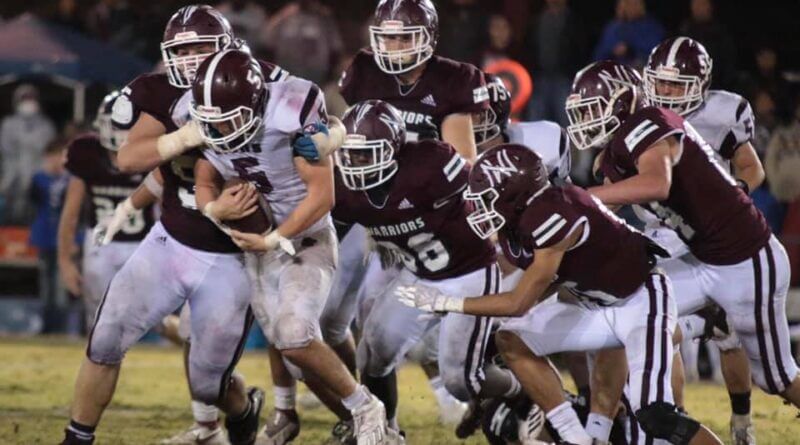 On Friday, it was business as usual for Biggersville as they came away with a 26-0 victory on the road over previously undefeated Nanih Waiyah to claim the North Half championship and set a date with Lumberton for a state championship.

Biggersville forced a turnover on downs after Nanih Waiya drove deep into their own territory and then speedster Zae Davis took the ball 85 yards to the house 3 plays later for the games first score. Dylan Rowsey, pressed into action as the third string quarterback, connected with Goldman Butler for the two point conversion and an 8-0 Lion lead.

The Lions would add a Butler one yard score that was set up by a 35 yard sprint up the middle by Goldman on their next series for a 14-0 lead. The Warriors would fumble the ensuing kickoff back to Biggersville and see them march down the field again, this time getting a Davis 7 yard score to close out the first half scoring.

Biggersville with a big first half lead in sub-optimal conditions due to rain is not something opponents want to see. The Lions showed why in the second half.

After getting the kickoff to start the second half, Biggersville chewed up nearly 18 minutes of game clock and tacked on another score on another Butler one yard rush for the final score of the game. Zyonn Mayes essentially ended the contest with an intereception with just over 4 minutes to play and then got an interception on the games final play to end the game.

On the night, the Biggersville defense came away with 5 turnovers and allowed just 91 total yards.

The Lions are set to play Lumberton, who won South State over Simmons, at Veterans Memorial Stadium in Jackson on Friday, December 4 at 3 pm.