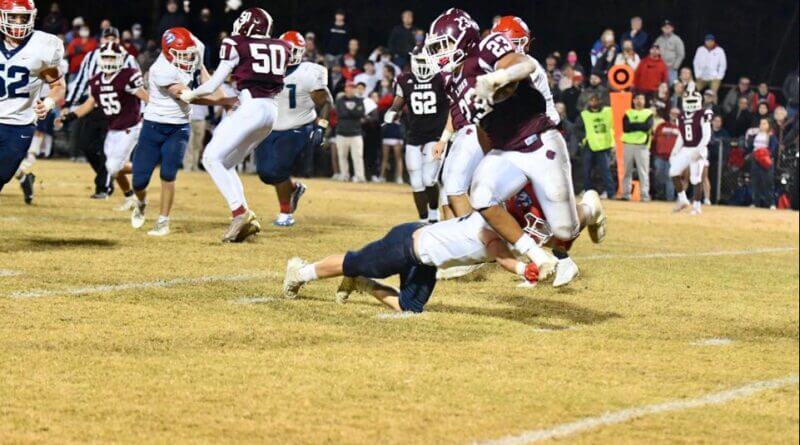 An unenviable position is being in the biggest game of the year down two scores to a high powered offense while you are playing your running back as the quarterback in an emergency situation due to injuries.

An enviable position is having that emergency use only quarterback being Goldman Butler.

The Biggersville workhorse toted the load on Friday night, racking up over 300 total yards and five touchdowns that included three passing scores, as the Lions downed TCPS 32-17 to make their first North Half title game appearance in school history.

TCPS jumped out 10-0 in the first quarter on a Khi Holiday to Noah Foster 63 yard pass and catch and a Stuart Long 29 yard field goal.

The Lions answerd with a 7 yard passing touchdown from Butler to Jack Eaton.

TCPS would answer back with a Khi Holiday one yard touchdown to give the Eagles a 17-6 advantage.

The Lions and Goldman Butler just went back to work.

“I knew I had to do it . I enjoy toting the load like that . It was fun,” Butler said of his taking control of the game.

Butler hit Zae Davis on a 34 yard sweep pass and then Dylan Rowsey hit Davis for the conversion to cut the TCPS lead to 17-14. Davis would pick off Holiday just before the first half ended and the Lions took all the momentum into the second half.

The second half looked much like the first, with Butler asserting his will over the contest and the defense delivering big play after big play, perhaps the biggest of which was a Cole Butler sack on 3rd and 18 that nearly tore the jersey off of TCPS quarterback Khi Holiday.

Butler would throw another running back toss pass touchdown, this time to Jarell Jones, and get two rushing touchdowns in the fourth quarter to put the game away.

Biggersville is set to take on Nanih Waiya for the North Half title next Friday.

2 thoughts on “Huge game from Butler, second half shutout propel Lions to North Half title game”