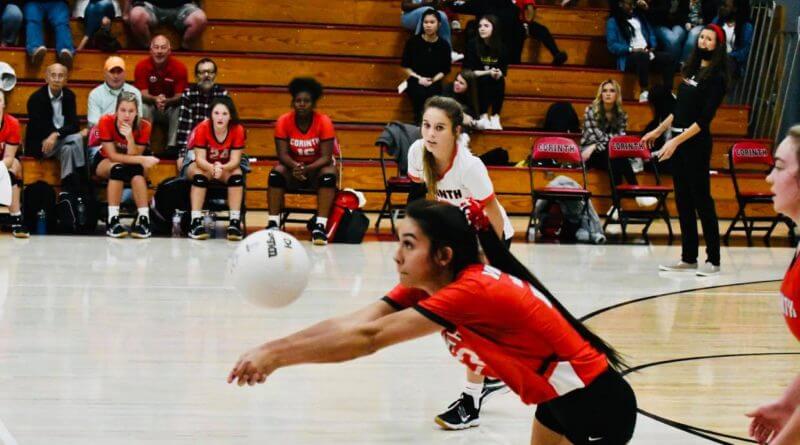 The Corinth Warriors knew what they had to do to continue playing volleyball in 2020, needing a solid victory over the visitng Ripley Lady Tigers to get in to the class 4A playoffs.

“We kept telling the players that you never know when it’s going to be your last game, especially this season where we have been quarantied twice. We talked about going out and getting the win playing the game we love and they did it,” first year head coach Emma Heubi said after the thrilling win.

Ripley took the first set 25-23 behind 4 kills from outside hitter Lexi Page, a recent committ to Northwest Community college.

“I thought we started strong and kept fighting. We had our opporunties to close the game out but couldn’t be consistent. Congrats to Corinth on the win,” Ripley coach Greg Dillard said after the loss.

Ripley would take a 2-1 set lead after claiming the third set, but Corinth would use a 7-0 run in the fourth set with Carys Goodwin serving to take the 25-14 win, meaning if they won the fifth set they would have the neccesary points to advance.

Prior to the start of the final set, senior setter Courtney Essary and outside hitter Kate Nakagawa could be seen exchanging a similar idea: this is our time, and we aren’t going to lose.

The pair proved good on their word, connecting for 4 set/kill combinations in the final frame to ensure their season will continue. Sophmore Libero Anna Greene hit Nakagaw for the games final point.

Corinth moves on to face Kosciusko in the first round of the state playoffs on Tuesday. The game is on the road with it set to start at 6 pm.