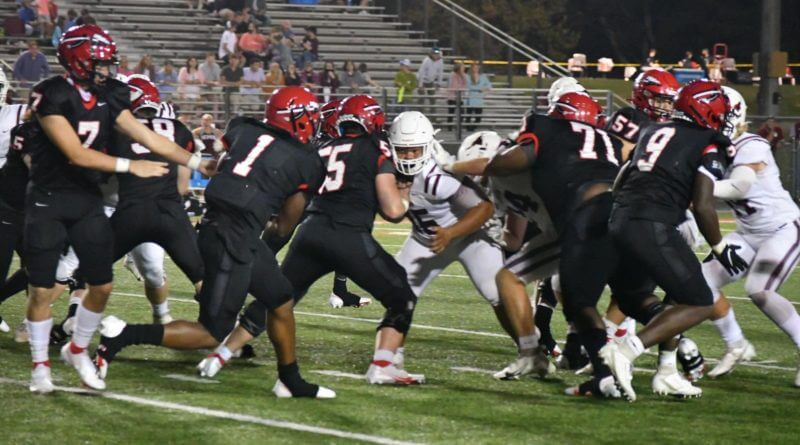 Kossuth opened the game with a big touchdown pass from Brock Seago to Hank Eaton, setting the tone for the game that the Warriors of Corinth would have to bring their A game to take out the Aggies.

Thankfully for Corinth, Cayden Betts and the Warrior offense would get an A+ for their second half effort.

The Warriors turned a game that was 23-14 at the half into a 66-27 final thanks in large part to a monster performance from swiss army knife Cayden Betts, who finished the game with 227 and three touchdowns on the ground, an 80 yard kick return touchdown and a recovered fumble on defense.

The Aggies had a pair of bad breaks on the last play of the first half and the first play of the second half that could have potentially switched all of the momentum of the constest. Kossuth blocked a Corinth kick and Eaton returned it for a touchdown but it was called back for a block in the back. To start the second half, Kossuth attempted an onside kick that slipped through their fingers. Once Corinth recovered, Betts took the first play 52 yards for a Corinth touchdown.

Sophmore quarterback Brawner Cregeen went 11-16 on the game for 125 yards and 2 TD passes, one to Braxton Curlee for a 58-yard TD on a screen pass and one to Devon Jones for a 15-yard touchdown that put an end to his night midway through the fourth quarter.

“It wast just his third start ever and I thought he (Cregeen) did well. He is impressive more and more every time he steps on the field,” head coach Todd Lowery said of his sophmore quarterback.

Backup quarterback Matthew Inman would hit Q Wimsatt for a 21-yard TD to end the scoring for Corinth.

Christian Barber for Corinth went over 100 for the fist time in his career with 7 carries for 123 yards and a touchdown. Naz Jones also found the endzone for Corinth, who had over 600 yards of total offense on the night.

Seago had a monster game for Kossuth in his own right and drew praise from the opposing coach as he finished with three touchdowns passing, a pair to Eaton and one to Reece Crum, and one toucdown on the ground to go with over 300 total yards.

Kossuth fell to 1-2 on the season with a home game against Senatobia up next. Corinth improved to 2-1 and they take on 6A MAIS power MRA Friday night in the Mississippi Sports statewide game of the week.