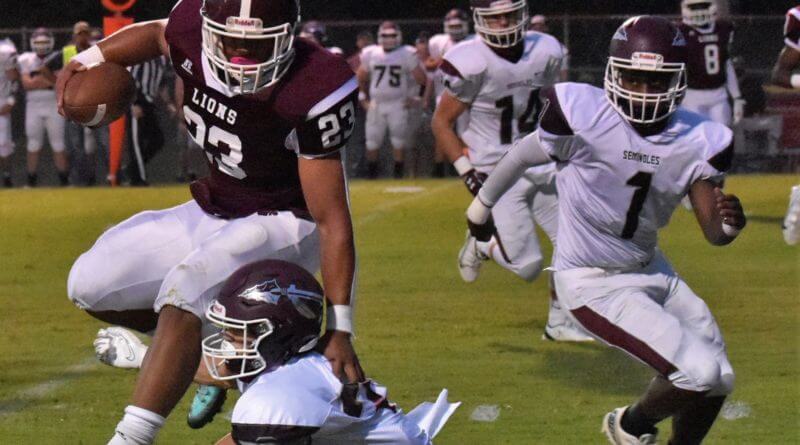 The Biggersville Lions came in to their matchup against Smithville on Friday having not gotten a win against the Seminoles from Monroe County in 40 years.

The Lions showed why they are ranked as the #2 team in 1A in the latest AP poll this season.

Biggersville raced out to a 20-0 and never looked back, cruisng to a 64-0 win to move to 3-0 on the season with an impressive dismantling of a team ranked in the top ten in 1A football in Mississippi.

The Lions got 5 turnovers and a pair of defensive touchdowns, including a couple of picks from Jarell Jones in the first quarter, a Zion Mayes pick-six and a Derenzo Shields scoop and score in the third quarter.

Drew Rowsey got the scoring started with an 8 yard pass to Zae Davis. Goldman Butler put in the two point conversion and the rout was on for the Lions.

Butler carried the offensive load with 20 carries for 249 and 4 touchdowns, including a 74 and 54 yard run in the first half.

Rowsey ended the night with a pair of touchdowns to Davis and looked poised beyond his years as a first year starting quarterback.

Dylan Rowsey closed the night out with the final score to put the cherry on top of the Lions impressive win.

Biggersville is back in action next Friday in an away division game against Myrtle.