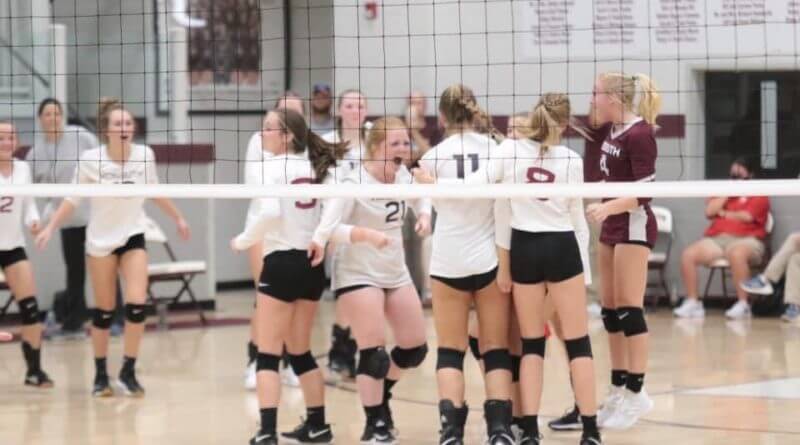 2020 is a season of “new” for high school sports, and that was evident in Monday night’s season opener for Kossuth and Corinth.

New regulations on the amount of fans allowed in the game had a much lower attendance than would be normal for a contest between the in-county rivals. Each have new coaches. Both teams have a new starting lineup after replacing the majority of the production from last season due to graduation.

Add “Kossuth picks up victory over Corinth” to the new list..

The Lady Aggies picked up a clean sweep over the visiting Lady Warriors 25-17, 25-19, 25-22 to pick up not just their first match win, but their first game win in program history over Corinth.

“I am proud of this team’s heart. There are a lot of things I can teach as a coach, but heart isn’t one of them. These girls want to win,” first year Kossuth coach Dawnell Haupt said of her team.

Haupt comes to Kossuth as a transplant from Arizona, where she was a high school and club level coach.

The Lady Aggies and their first year coach picked up the win over 4A Corinth after dispatching 4A Ripley in scrimmage action on Saturday.

“I am very proud of how our team has performed early in the season. We still have work to do as we continue through the season,” Haupt said of the early returns on the season.

Kossuth was led by Dacey-Kate Marsh and Emma Arthur with 4 service aces and 4 assists each. Libero Bella Duncan led with 3 digs. Bailey Wilbanks led with 6 blocks and 4 kills.

Kossuth is on the road for their 2nd game of the season against 4A Pontotoc on Thursday. Corinth is taking on Booneville on Tuesday in the first ever game for the Lady Blue Devils.