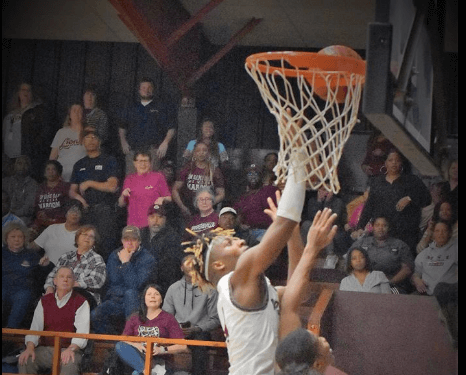 Biggersville found itself in a heated opening round matchup against a quality opponent on Tuesday. The kind of game that tests your mettle.

The kind of game where your desire to win is the most important attribute.

Thankfully for the Lions, Te’lick Barnett refused to lose.

Barnett got a putback basket with under a second to play and Biggersville escaped round with a 73-71 victory over Myrtle to advance to round 2.

The Hawks of Myrtle kept coming after Biggersville, erasing an 18 point second half deficit then tying the game on a steal and layup from leading scorer A.I. Nugent.

Biggersville, with the ball and time wind down, turned to their own leading scorer, Hunter Stacy, who missed a driving shot attempt. Barnett was there, as he so often is, to gather the rebound and put home the winning shot.

The Lions move on to face Coffeeville in a rematch of their contest from the Baldwyn Invitation earlier this season which Biggersville won 81-72.

Biggersville travels to Coffeeville for the matchup Saturday.