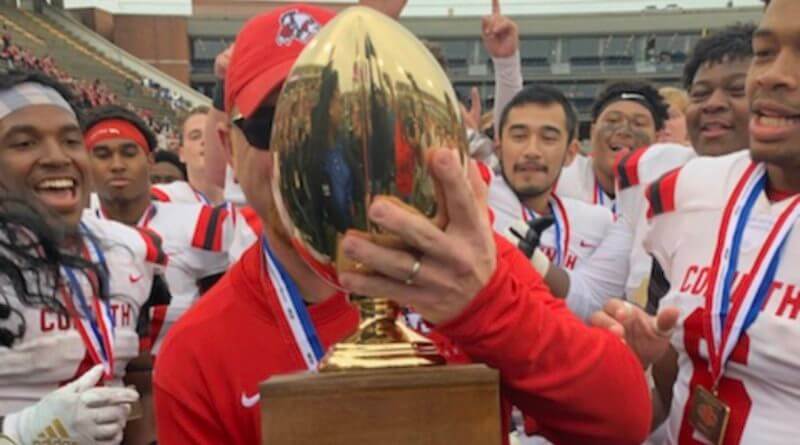 The Corinth Warriors had a goal. It was not a pipe dream, as they were so close last year they could taste the title.

The taste of unfinished business.

The Warriors erased that taste from their memory on Saturday with a win over Poplarville to claim the schools first ever state championship.

Corinth rushed for 162 yards in the first quarter and built a 14-7 first quarter advantage behind a DT Sheffield 49 yard sprint and a Tam Patterson 9 yard burst.

The scoring for the Warriors was just getting started.

Patterson added a 2 yard plunge and Sheffield hit DK Gaines for a 69 yard TD in the second quarter.

Before the half, Sheffield added a highlight reel TD run, showing off his speed on a 30 yard TD run with just 8 seconds before the end of the half, giving Corinth a 34-7 advantage.

The third quarter was more of the same for the Warriors: sticking defense and big plays.

DT Sheffield hit DK Gaines for a 43-yard TD pass the Sheffield broke off a 72 yard touchdown run for a 48-13 advantage after 3 quarters.

As has been the case all season, the 4th has been Warrior time. And they used the fourth to once and for al finish the business they started at the end of last season.

A Tam Patterson 35-yard TD run through the middle of the Poplarville defense made it 55-21 Corinth and turned into the final score of the contest.

Tameron Patterson WILL NOT QUIT!! He scores from 35 yards out. Corinth can smell it now. @SESMississippi

Corinth, after waiting over a year, took care of business. They claimed the 4A state championship. DT Sheffield was named MVP.