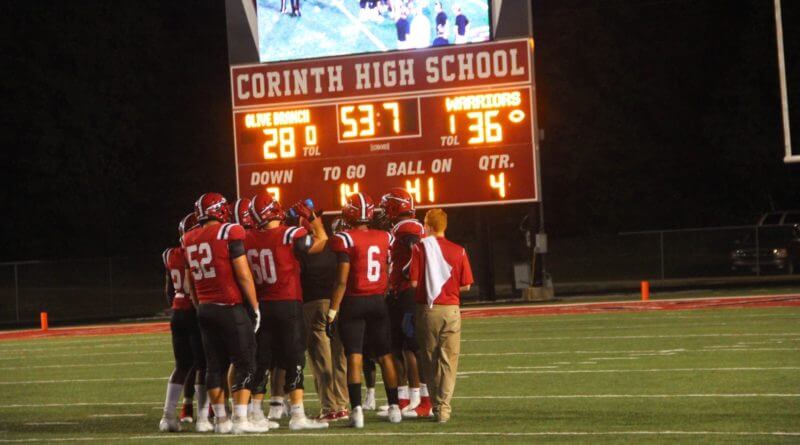 It’s no secret that the Corinth Warriors gameplay heading into any contest is the following: run the ball, pick your spots, let your playmakers make plays and play tenacious defense.

Olive Branch came into the contest with a seemingly simple task at hand: sell out to stop the run. The 6A Desoto County squad thought they had superior numbers, the size and speed to accomplish slowing down the Corinth rushing attack.

They weren’t prepared, however, for the arial assault the Warriors unleashed Friday night.

DT Sheffield threw for 246 yards and three scores while rushing for 109, including an 81 yard touchdown scamper in the third quarter that busted the game open and helped Corinth to a 36-28 victory.

The Warriors trailed at halftime 14-10 with scores coming via a Sheffield to DK Gaines 23 yard pass and a John Ellis Murrah 30 yard FG.

The second half was a back and forth affair, with perhaps the play of the game coming as Sheffield hit Calvin Jones with a touchdown strike in 4th down with 8:30 left in game to give Corinth a 30-21 lead they would not relinquish.

Corinth is back in action Friday against in county foe Kossuth.