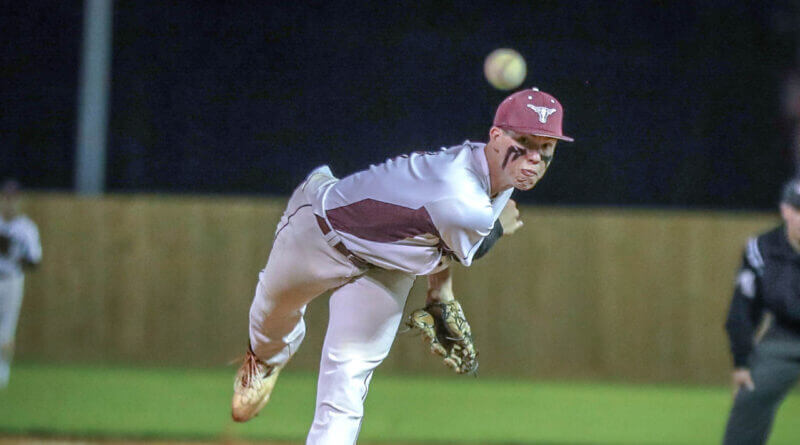 Kossuth has been on a roll the last two weeks. They were up to their winning ways again Friday night.

The Aggies put up four runs in the second inning which proved to be plenty of offense as they rolled to a 9-0 win over Mantachie to move to 9-5 on the season. It was their 5th straight win and second straight season sweep over a key opponent. More importantly, they are now 5-1 in district play.

Kossuth got on the board in the bottom of the second inning with back to back singles from Bryson Jackson and Rylan Henry followed by a double from Jake Allen. Allen and Jack Johnson would also come around to score thanks to some wild pitching from Mantachie.

That would be all of the offense the Aggies would need with Kossuth starter Hank Eaton locked in.

Eaton, an Auburn baseball commit, was greeted with chants of ‘Roll Tide’ from the Mustang dugout, but he was able to tune that out and go on to spin a gem on the mound. striking out 12 and allowing just 3 hits.

Eaton struck out the side in the third and only allowed one runner to advance into scoring position from that point forward.

Mississippi Sports on Twitter: “Kossuth leading Mantachie 4-0 after three innings. Kossuth sophomore Hank Eaton has 7 K’s after 3 in the 3rd. The Auburn commit is fired up. He can sling it. https://t.co/rvCQ37QOoM” / Twitter

Kossuth leading Mantachie 4-0 after three innings. Kossuth sophomore Hank Eaton has 7 K’s after 3 in the 3rd. The Auburn commit is fired up. He can sling it. pic.twitter.com/rvCQ37QOoM

The sixth saw Jack Johnson launch a solo shot homer to put an exclamation mark on the Kossuth victory.

In the game, Johnson and Eaton each scored multiple runs with Johnson the lone Aggie with multiple hits.

Eaton ended the game by inducing a swinging strikeout from Mantachie. The sophmore moved to 4-1 on the mound on the season.

Hank Eaton gets a K to end it. Kossuth defeats Mantachie 8-0. Eaton has 12 K’s and gives up 3 hits for the win. pic.twitter.com/zCci8CJ4j0