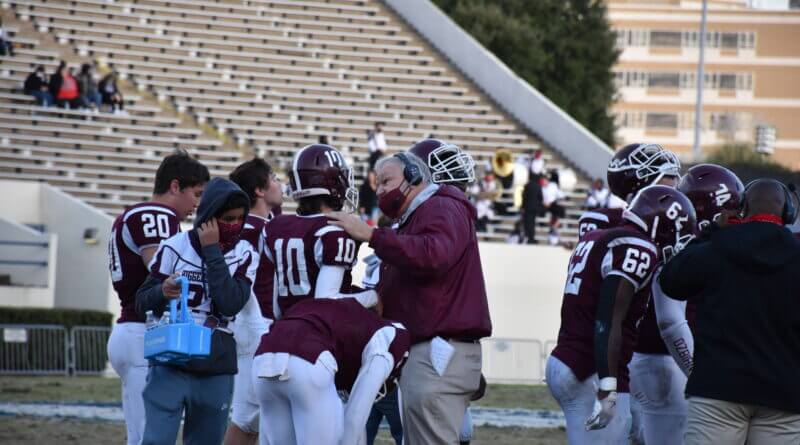 The Biggersville Lions came to Jackson in an attempt to make history with the schools
first ever state championship. That effort came up just short as the fell to the Lumberton
Panthers 20-14.

Today also represented the final game of the Stan Platt era in Biggersville, as
Platt will retire and move to Orange Beach with his wife following the season.

“Today was my final game as the coach of the Lions,” Biggersville head coach Stan Platt
said. “I’m going to move down to Orange Beach with my wife. These kids are going to continue
to work hard and this isn’t the end for Biggersville. The future is bright for this football
program.”

Platt’s group of players at Biggersville won more games than any other group ever had
at this school. They finished this season 13-1, which was the best season in school history. Platt couldn’t say enough about his players and their accomplishments in his tenure.

“You saw these kids and their character tonight,” Platt said. “They fought back from
being down 14-0 at halftime to tie this thing at 14. There’s no quit in this bunch. They played
hard. I asked them to leave it on the field and they left it on the field. They gave it everything
they had. This group of seniors has been super special, and they played hard and there’s not
many more words to describe them.”

One of the seniors that finished his career tonight was do it all superstar Goldman
Butler. He ran for over 1,700 yards and 26 touchdowns in his senior campaign. He gave high
praise of Coach Platt and the teammates that he has around him.

“He started building this program the day that he got here,” Biggersville running back
Goldman Butler said. “We got better and better every year and we worked incredibly hard to
get here, and we came up a little bit short, but we got to where we wanted to be.”

Butler finished with 114 yards passing and 51 yards rushing and two total touchdowns in
today’s matchup. The Lions just couldn’t overcome early penalties and turnovers in the end.
The town of Biggersville traveled in force to support their team today. Coach Platt couldn’t have been more thankful for their continued support throughout his tenure.

“That is our community right there,” Platt said. “They drove 4.5 hours to be here and
took off work today to be here. To hear them throughout the game, it was special, and I never
would’ve expected a 1A crowd to pack a section like they did, but they’ve done that every
single game and I can’t be more thankful for that.”

This is a Biggersville program that has now ascended to being one of the contenders for
state championships in Class 1A, but that’s not where they came from. This program had
historically struggled to produce good football teams. The work that Coach Platt did in his five
years has changed the program forever. This program isn’t going away after one run. They’re
not a flash in the pan. They’re built for long term success. Biggersville is here to stay. Coach
Platt is as responsible for that as anyone.

“Biggersville wasn’t very strong when I got here,” Platt said. “We were everybody’s
homecoming, or we were everybody’s senior night, and from the day I got here and saw this
group of kids, I knew we were going to be a special program. They committed themselves back
then and kept working hard and built a culture of winning here.”