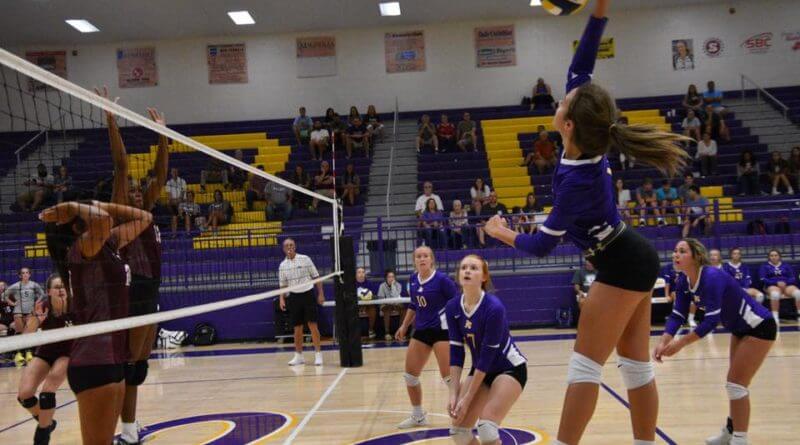 A few area teams got their season underway today in Glen, MS as the Lady Bears of Alcorn Central hosted a season opening volleyball classic.

Four teams total showed up to match their talents against one another in the days competition.

The Bulldogs of New Albany, the Lions of Biggersville, the Eagles of Falkner, and, of course, the Bears of Alcorn Central were among the teams that competed in today’s classic.

Today’s games were not much different than any of the ones each team will play all season. Each match consisted of a Best-of-Three series. Today’s rule exception was the addition of a 27 point cap in each game to keep things on schedule. Otherwise, it was business as usual.

The game of the day was between the Lady Bulldogs of New Albany and the Lady Bears of Alcorn Central, but we stayed to catch the box scores for all games. Those are listed below. Pictures below courtest Dena Barnett with Alcorn County Sports and you can see more pictures from the contests at Big Lion Photography.

The first game of the three game series started out pretty close. The Lady Bears had first serve, and the Lady Bulldogs kept a decent volley going. It was apparent to crowd that these two teams are of fairly equal talent because the score reflected so. As one team would earn a point off a bad return or an aced serve, the other would come back and do the same thing. The Lady Bulldogs finally started to pull away after their three point run that pulled them ahead 19-16. Though they gained speed, it didn’t keep AC from fighting back. Nice shots and some unfortunate returns by the Bulldogs gave the Lady Bears a chance to catch back up. The Bears had it to one point before NA found their footing again and took away the first game with a 20-25 win.

Alcorn Central needed to put something strong together in order to win the second game and force a third. And that, they did.

Although New Albany jumped out in front early on in the game, the Lady Bears accepted the challenge and started trailing pretty quickly. It wasn’t until point number 22 until the Lady Bears took control of the game. That seemed to not only energize the girls, but it put a certain fire in the fans as well. Just immediately after the Lady Bears took the lead, a bad serve found the net and tied the score up 22-22. A quick return by the Bulldogs allowed them to recapture the lead, but the excitement may have gotten the best of them because they had a bit of miscommunication and lost a return at the net. Tied at 23, the end was in sight.

The Lady Bears needed a two point run to stay alive. A few good hits and a couple missed returns kept the game hot and heavy as both teams reached 25 with no apparent winner. At this point, the first one to snag 27 points would walk away victorious. Two people attempting to return the same ball cost Alcorn Central a point at the net driving the score in favor of the Bulldogs 26-25. However, spirits never dropped because NA had a strong serve that just extended beyond the baseline of the court. In other words, it was out of bounds. As each team had rightfully earned 26 points, both had their eye on 27. A return into the net by the one game leaders, put the Lady Bears in the position they needed to settle the match in game three.

The Lady Bears shared two points with the Lady Dogs early in game three of the contest. At first, this game was beginning to look a lot like game two. That was until the Lady Bears picked up the pace and cruised forward with a seven point run. However, things slowed down slightly after a few Lady Bears made some bad returns that eventually gave up five points. Several decent volleys at the net left the Lady Bears the chance to claim the series victory with a 15-10 finish in game three.